Kenya’s Maasai Mara is full of surprises, 36 years on

Our second camp, Mara Plains, took all this to extremes. It had a tree-top library, a spa, a drawing room, two suspension bridges and a stretch of river. Arranged along a walkway of recycled railway sleepers, this was no ordinary glamp-site but a tented stately home. Every suite had a terrace and a giant copper bath. One of these pavilions, the Jahazi, was so vast and aristocratic it would easily have swallowed an orangery or a couple of ballrooms.

The staff were always splendidly attentive, in their khaki drill. Whenever we arrived or departed, they would line up, Downton Abbey-style. But they could also be chatty and charming. Amos the waiter was horrified by the thought of snow, and by the fact that we didn’t have our own herd of cows.

Robinson, meanwhile, had a spear and looked after us at night. Then there was Timothy the chef. He would conjure the most gorgeous dishes (pomegranate salad, perhaps, or passion fruit sorbet). How does he produce such things, out there in the wilds?

One night, we had a little earthquake. Way off, hippos grunted and lions groaned. In the camp, however, few of us woke – and the only sound…

To ensure this doesn’t happen in the future, please enable Javascript and cookies in your browser.

Is this happening to you frequently? Please report it on our feedback forum.

If you have an ad-blocker enabled you may be blocked from proceeding. Please disable your ad-blocker and refresh. 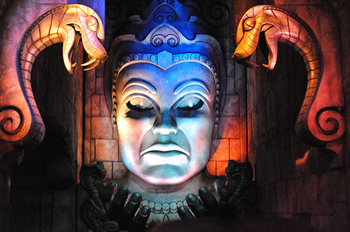 The Temple of the Forbidden Eye

Granting people with eternal youth, earthly riches or visions of the future

People looking into his eyes

The Jewel of Power

Source Mara is a deity who is featured in the Disneyland attraction Indiana Jones Adventure: Temple of the Forbidden Eye.

Mara was a deity worshiped in the Lost Delta region of what is now modern India. The Temple of the Forbidden Eye, located in modern India, was built as a dedication to Mara, who has the ability to grant one of three magical gifts to those who visit the temple—eternal youth, earthly riches or visions of the future. The catch being that none can look into the eyes of Mara without being punished by the wrath of the god. The temple came to be long since abandoned by its people and reclaimed by nature following a river-flood which occurred around 65 BC.

2,000 years later in 1935 the temple was rediscovered by Indiana Jones through the usage of a map which he obtained in the Bengalese temple of the tiger god Sherdil with a missing piece acquired on the…